Listen to the audio version of the story here:

TMU president Mohamed Lachemi said the aim of the fitness classes was to create “a positive space for this community, so that they can feel seen, safe and valued.” The classes remained full throughout the month, Lachemi said in an emailed statement.

TMU also offered pool times at the RAC for trans and gender diverse patrons. The designated times on Tuesdays and Thursdays were advertised for “anyone committed to creating a positive space for trans folks,” as per TMU’s website. According to the university, a total of 49 people attended these swimming sessions in November.

“I feel like Dione makes everyone feel seen and celebrated,” Castelo said.

Castelo is not transgender but he identifies as queer, and feels more comfortable in a class designed specifically for trans students and allies.

The trans-inclusive programming was coordinated by TMU athletics, with advocacy from the Trans Collective. They helped establish an all-gender changing space in Kerr Hall, and worked toward the launch of trans and gender diverse swimming hours.

“We will continue to educate and challenge ourselves to provide relevant, needed and welcome programming for the trans community, and other equity-deserving groups, into the future,” Lachemi said.

Second-year business management student Mila Vujnovic attended the fitness classes. She loved them, but thinks the school can do even more to promote inclusivity in athletics.

“I’m sure we can make more trans-inclusive spaces, especially in recreation,” she said. “It’s really hard to put yourself out there and be vulnerable at the gym, let alone if you are a trans student.” 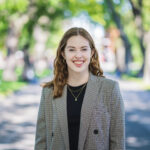