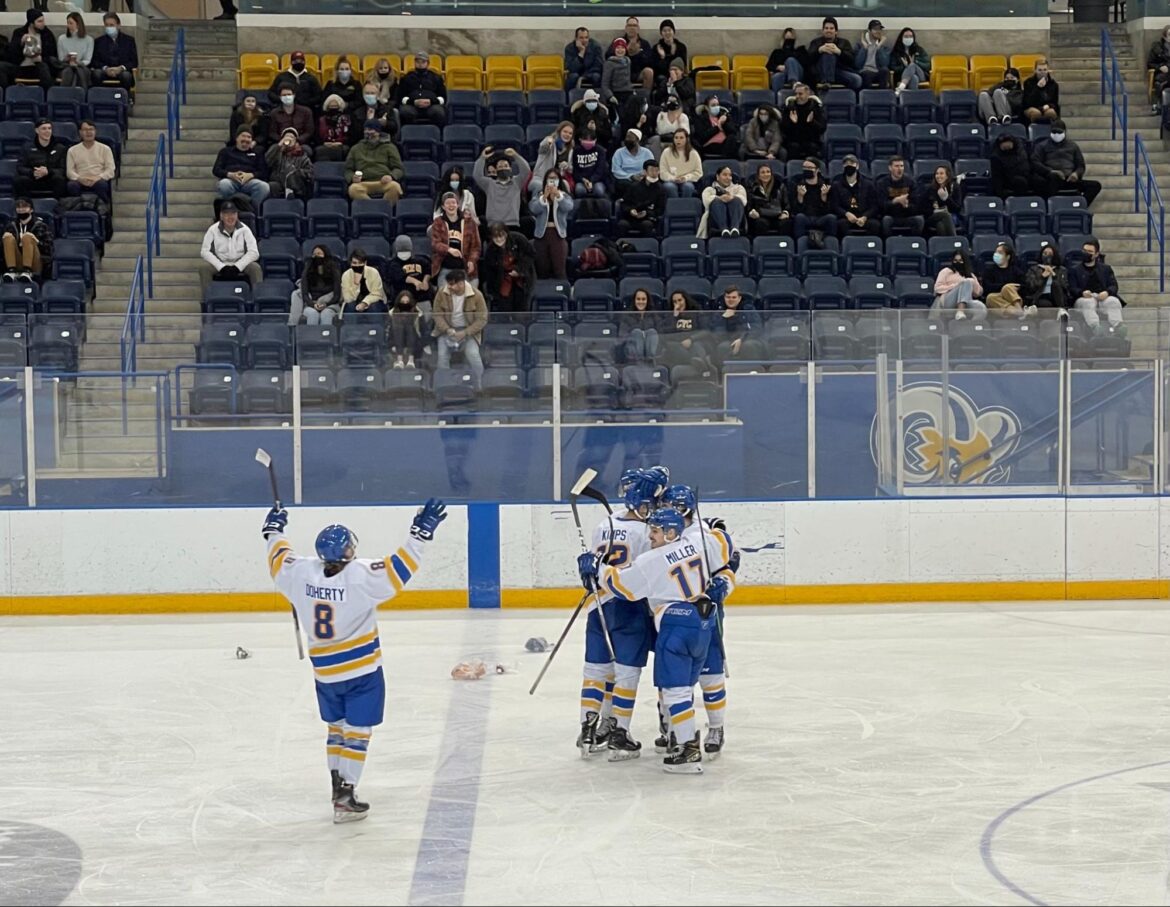 After failing to capitalize on a big shot advantage in the first two periods, the Rams scored three straight goals in the third to steal a 3-1 home ice victory over the Toronto Varsity Blues Thursday night.

They were led by first-year forward Kyle Bollers, who scored the game-winning goal.

The first goal for either side wouldn’t come until 14 minutes into the second period when Varsity Blues’ first-year forward Danny Katic found the puck in a scramble in the crease and knocked it in.

Despite going scoreless in the second, the Rams had 20 shots on goal, almost matching their season high of 22 in a single period. They finished the game with a 45-22 shot advantage.

The Rams finally found the back of the net just over seven minutes into the third, when fourth-year forward Gregory DiTomaso scored on a slot shot to tie the game at one apiece.

Moments after the goal, teddy bears fell onto the ice from the stands with people throwing them in hopes of winning a pair of Toronto Maple Leafs tickets.

The teddy bears were sold on the third floor of the Mattamy Athletic Centre, with all proceeds going towards the Salvation Army and CTV’s Toy Mountain campaign.

With the game tied 1-1 and less than three minutes left in regulation, Bollers scored his fifth goal of the season to give the Rams the lead.

First-year forward Elijah Roberts brought the puck up along the boards and passed it to Bollers, who tucked it over the shoulder of Varsity Blues’ third-year goalie Alex Bishop to win the game.

“We were peppering the goalie all game,” said Bollers. “Our line was flying, everyone was flying. And to finally put it past [Bishop] was unbelievable.”

He extended his team-leading goal count to five on the season. He scored twice in the Rams’ win against Lakehead on Nov. 13.

The Varsity Blues pulled Bishop for an extra man advantage in the final minute. With 20 seconds left in the game a slapshot directed at the Rams’ net hit the post.

The Rams took the puck the other way, and third-year forward Jacob Kamps iced the game with an empty-net goal.

The Varsity Blues have struggled protecting the net this season, allowing 19 goals in five games.

“[Lee] and his team do a tremendous job behind the scenes, really mapping out where we’re having success, and where we may be looking to make some adjustments,” he said.

The Varsity Blues and the Rams will face off four more times this season.

The Rams wrap up the first half of the season against the Brock Badgers this Saturday, Nov. 27, at the Seymour-Hannah Centre in St. Catharines. 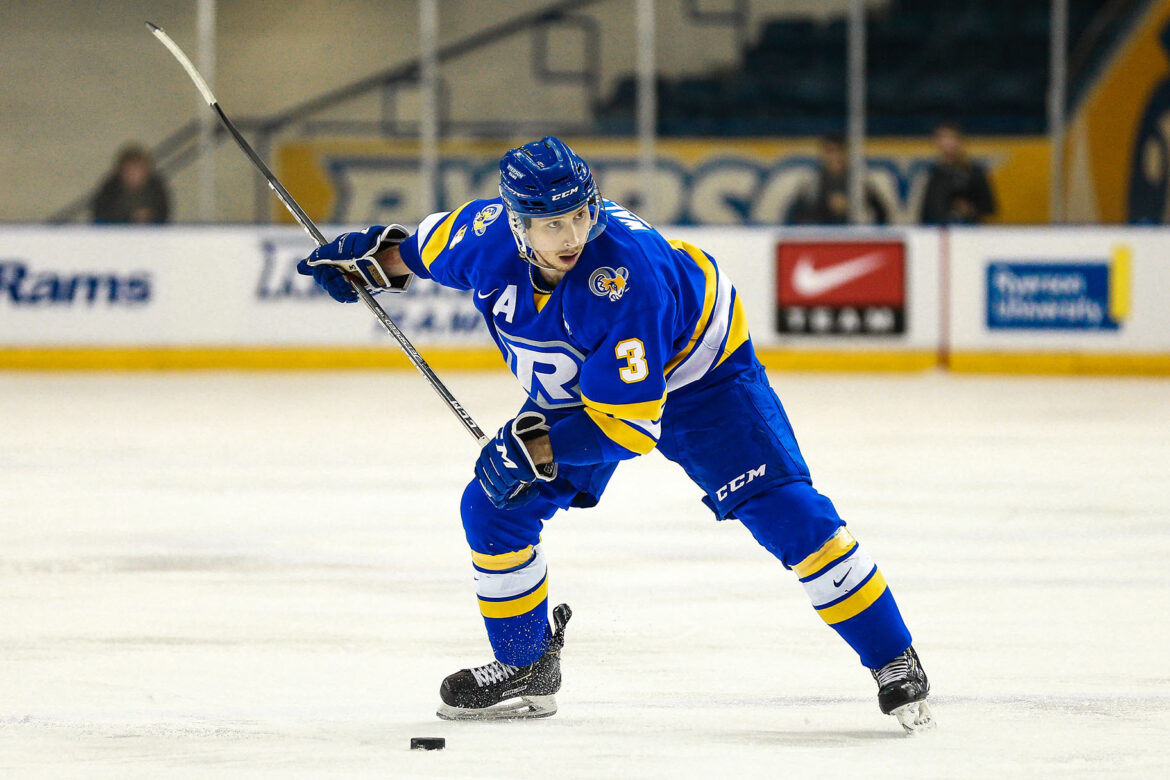 The Rams men’s hockey team will be returning to the ice on Thursday night after missing nearly two years of play to COVID-19.

The team is coming off a 3-2 record in the pre-season as it goes into its home opener against the Brock Badgers.

The Rams racked up wins in the pre-season against the University of Toronto Varsity Blues, Queen’s Gaels and Guelph Gryphons.

They lost their other games, against the Western Mustangs and Windsor Lancers.

The Mustangs also defeated them in the OUA West divisional semifinal in the 2019-20 season, after the Rams won 20 regular-season games.

For the last five seasons, the Rams journey to an Ontario championship has stopped at the semifinals.

Going into this season, head coach Johnny Duco said he believes the return to play is something the team is more than ready for.

“We were fortunate to have an extended training camp like we have, where we can truly treat it as more of a return to play than we would a typical training camp,” said Duco.

Duco said easing the team into practice instead of throwing them into full activities was the smarter call.

“We’ve tried to be very mindful and thoughtful of making sure that we’re remaining as healthy as possible and setting [the team] up to be successful.”

Associate coach Nathaniel Brooks said the team started to skate together in August and gradually introduced different elements into practice.

The focus has now shifted to consistently performing up to expectations, Brooks added.

“It’s about teaching them the nuances of the league, focusing on the little details, so that they can build consistency,” said Brooks. “It’s basically like pro hockey but you’re at school.”

Brooks said the team is in a good place physically, and that the players are engaged after participating in three-on-three tournaments during training camp.

The team is veteran-heavy and they have made sure that the new players that have joined the Rams are comfortable with the team, Duco said.

“Our leadership group is tremendous,” said Duco. ”They’ve welcomed the first- and second-year players that have yet to suit up with open arms.”

There are 16 returning players from the 2019-20 roster, including newly minted captain Jared Walsh.

Walsh, a fourth-year defenceman, is taking over from previous captain, Matt Mistele, who signed professionally in Slovakia in August 2020.

Duco said that it was important to let the process of selecting a new captain happen organically as the players reconnected with each other after a long hiatus.

Ultimately, the players voted for the captain and assistant captains this year, and were asked to provide a rationale for their choice.

“I think the players spoke loud and clear as to who they thought the leaders on the team were and we supported that,” said Duco.

Mistele was not the only departure from the team. Starting goalie Taylor Dupuis also signed professionally in September 2020.

Longtime stalwarts of the team, Mathew Santos and Devon Paliani, signed last month with the Maine Mariners of the East Coast Hockey League, an affiliate of the Boston Bruins.

However, many valuable players remain on the team.

Fourth-year defender Gregory DiTomaso and third-year Mark Shoemaker also returned to the roster, as graduate students in the Ted Rogers School of Management

The team also has 13 new players from two recruiting classes.

Defenceman Ryan Wells came from the Greater Ontario Junior Hockey League (GOJHL), where he captained the Caledonia Corvairs, leading all defencemen with 72 points in 46 games.

Veteran goaltender Luke Peressini also joined the team from the Western Mustangs after defeating the Rams in the OUA West divisional semifinal in the 2019-20 season.

Brooks said that the loss of veteran players is overstated and the team is ready to compete regardless of who is on the roster.

“We really like our group and are confident in what this group can do,” said Brooks. “We think that we’re a top-tier team that’s gonna do a lot of damage.”

The event is one of four majors on the PGA Tour.

On Sept. 17, former Ryerson Rams hockey player Mitchell Theoret will be caddying for Canadian golfer Taylor Pendrith in one of the biggest events in professional golf — the U.S. Open.

“Should be pretty fun,” Theoret said. “Not too many people get to caddie on the PGA Tour, let alone caddie in a major. So it’ll definitely be a pretty cool experience.”

Back in early August, the duo qualified for the major by earning enough points during the season to nab a top five spot on the Korn Ferry Tour (formerly Web.com Tour) points list after the WinCo Foods Portland Open.

Before his career as a caddie, Theoret played on the Ryerson Rams men’s hockey team for two seasons. This includes the 2016-17 Rams team which had one of the most dominant rosters in recent years. That season, the team finished first in the Ontario University Athletics West Conference regular season and achieved multiple team records.

After his tenure with the Rams, Theoret went on to play two seasons of professional hockey in Europe before making the jump to professional caddying. This included stops with the Kongsvinger Knights in the Norwegian league’s second division and VHK Vsetín in the Czech First League, according to eliteprospects.com.

Despite only becoming Pendrith’s full-time caddie last year, the two have been able to find quick success together. That’s likely because Theoret played golf with Pendrith growing up. As a result of seeing the golfer’s game over the years, Theoret said the two almost always have the same mindset on the course.

“I just know his game so well,” said Theoret. “I know when he’s on, what’s working and when we get to the ball I can already sort of tell… what kind of shots he wants to hit into the green and off the tee.”

Theoret helped Pendrith finish second in the Mackenzie Tour in 2019. This granted Pendrith status to play on the Korn Ferry Tour for the 2020 season, the tour directly below the PGA Tour.

Knowing the right shots to hit is especially crucial at majors like the U.S. Open, said caddie Brennan Little, who was Gary Woodland’s caddie when he won the U.S. Open last year, “because of the speed of the greens and the rough around the greens, to know where to hit it on the greens.” Little, who also caddied for Canadian golf legend Mike Weir when he won the Masters in 2003, compared being in a major in golf to being in the playoffs for hockey.

Little said he will be caddying for Woodland again this year when the 120th U.S. Open goes to Winged Foot Golf Club in Mamaroneck, N.Y. this week. Canadian golfers Adam Hadwin, Corey Conners and Mackenzie Hughes will also be in the field for the major.

While Theoret said he’s excited for the event, he admits that it hasn’t completely sunk in yet that they’re actually going to the U.S. Open.

“I’m sure once we get to New York and we get to the course, Monday morning will probably be a bit of a different feeling.”