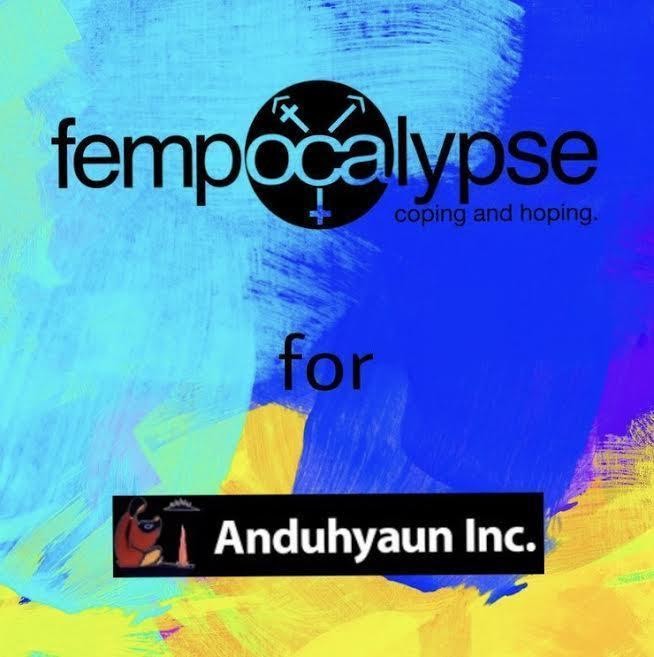 Fempocalypse: A live feminist cabaret moved online during the pandemic

The live performance industry has been hit hard by the COVID-19 pandemic, with many theatres and performance artists being forced online or out of work altogether.

Theatre in particular is fueled by live, in-person performances and audience connection, which is difficult to replicate online.

Despite the challenges, many theatre directors are adapting to the new reality of online performing with new and creative methods.

“I don’t think that digital theatre always gets it right, but I do think that a cabaret is a great format for digital live entertainment because there’s such variety in what you’re seeing,” said Veronica Hortiguela, a Ryerson school of performance graduate and a performer in the cabaret.

Each year, Nightwood runs the Young Innovators Program, which seeks to give up-and-coming women and gender-marginalized people opportunities to break into the industry by teaching relevant skills and offering experience in theatre creation and production.

The participants end the program each year with a fundraiser and final performance – usually a live cabaret – organized completely by the young innovators.

The program and cabaret were forced to be online this year, but the program still found ways to fulfil its mandate to help its young innovators learn and gain experience in the theatre world.

“(I’ve learned) how to connect with an audience that is feeling very alone or burnt out in a way that’s really rooted in community,” said Young Innovators Program participant Natasha Ramondino. “It’s forced me to look at things a little bit more outside the box and think of things through a broader creative lens.”

The cabaret will consist of six separate acts, each being five to seven minutes. The performance styles will vary from act to act, but each performer will be guided by this year’s Fempocalypse theme: “Coping and hoping.”

“We were really impressed by the honesty that the artists gave us about their creative process especially through the pandemic,” said Ramondino. “I think we’ve picked a very diverse and interesting group to showcase on the night.”

As part of the Fempocalypse fundraiser, the participants also organized an online gallery that displays visual art from local artists as well as a silent auction with the help of Canadian businesses.

All funds raised are being donated to Anduhyaun, a not-for-profit charitable agency originally created to respond to the needs of Toronto’s Indigenous women by opening a hostel in 1973. It is now one of Canada’s oldest organizations supporting women and children recovering from the traumas of violence and homelessness with a network of shelters and a transitional housing program.

The need for support for Indigenous women and children has only increased during the pandemic, due in part to the global rise of domestic violence, said an Anduhyaun spokesperson.

“At the very beginning of the pandemic our numbers decreased, concernedly, implying women were isolating at home with their abusers under the stay-at-home/emergency orders,” the spokesperson said. “Calls did increase over time and the shelter has been busy over the pandemic, but we were also forced to reduce our intake capacity to allow for social distancing.”

Anduhyaun, which means “our home” in Ojibwa, is in the process of building a new shelter to serve Indigenous women and children. Much of the funds they receive from Fempocalypse will go towards construction of the new shelter, set to begin later this year.

Ramondino said that she and her cohort of young innovators are very passionate about supporting Anduhyaun and supporting Indigenous women and other marginalized groups in all facets of life, including the theatre industry.

“I think we would be remiss to talk about the future of feminist theatre without speaking to intersectionality,” said Ramondino. “Our obvious priority has to be rooted in amplifying the artistic voices of Black, Indigenous, people of colour, the LGBTQ2S+ community, and folks of all abilities.”

Hortiguela says that it’s important for theatre companies to organize events and performances like Fempocalypse that put the voices of young artists and feminist themes centre-stage.

“Fempocalypse is unique in that it puts at the forefront the voices of female identifying artists, which is not always a priority in our industry unfortunately,” said Hortiguela. “It also is promoting young artists which I think is really terrific because I do think that young people have incredibly valuable ideas about how to push the industry forward.”

Fempocalypse’s online cabaret will take place at 7 p.m. on Saturday, March 13. Their silent auction and visual art gallery are already accessible online. For more information, visit the Fempocalypse 2021 Facebook or Instagram pages and at anduhyaun.org.

After discovering an unexpected love for the art of photography, Jordana Petruccelli started shooting professionally when she was 16.

Petruccelli took her craft from a hobby to a business before going to university to study photography. For the fourth-year Ryerson image arts student, getting a formal education in the craft seemed like the logical next step. At the time of her enrolment, Petruccelli wasn’t so worried about the idea of being employed in her field after graduation.

“I didn’t really question anything,” she said. “It felt like a natural thing to be doing.”

Armed with the influence of parents who work in business, Petruccelli felt like she understood how to start and grow a business. Although turning her passion into a profession seemed like a natural progression, it wasn’t until her first year of university that she started to see the competitive nature of the arts industry and the difficulty of making a full-time living from it, rather than doing it for extra cash while in high school.

“It becomes a race to the bottom,” she said. “There are photographers that will undercut other professionals on purpose with discounts and deals.”

Petruccelli’s business mainly focuses on portrait photography. She still does creative photography out of enjoyment, but even between her professional work and hobby shoots, often feels like she isn’t doing enough.

“There have been days where I’ve finished my work day and checked everything off my list, but I feel like I have to do more work when I don’t,” Petruccelli said. “I shouldn’t because I’ll burn myself out.”

“Hustle culture” is a phenomenon that has not only affected Petruccelli but many artists’ self-image. It’s the idea that people should always be working and should be loving it, according to an article by The New York Times. The newspaper and others have criticized the concept of hustle culture because of its detrimental effects on mental health, which in part come from an unhealthy link between worth and productivity. Still, artists tend to buy into the phenomenon and end up suffering because of it.

Hustle culture is driven by an incorrect notion that those who are constantly busy will see instant results, said Ryerson psychology alumnus Joey Florence, who is currently applying to a master’s program in his field of social psychology.

“It’s actually a really big myth because it’s the complete opposite,” Florence said. “Being too busy can actually cause sleep problems, which then relates to being less efficient, less focused and less productive.”

Florence, who is a multi-instrumental musician himself, said artists have particular challenges with hustle culture because of the difficulty of making a living in the arts.

Because productivity and an artist’s level of success play a role in their sense of self-worth, it can be easier for them to feel like they aren’t really doing anything. Florence said the reason so many people buy into hustle culture is because of a tendency to compare themselves to others.

“You think ‘wow, they’re hustling, so that means they’re better because the opposite of hustling is laziness, and if I’m not hustling, I’m lazy,’” he said.

Harrison Clark, a fourth-year film studies student at Ryerson, is focused on making his dream to be a filmmaker a reality despite dealing with a competitive job market. Even if he has to take a day job and make his own films on the side, he said it’s important that his day job still be in film.

“It would be kind of a waste of time to have done all this and not go into film as a career,” he said.

Most arts-driven careers are difficult to make a living in. A 2016 profile of the Canadian workforce found that the median income for artists is only $24,300 a year, 44 per cent lower than the national average of $43,500.

Alongside his filmmaking career, Clark has a hobby creating glitch art, a style of art where digital tools are used to corrupt and distort a photo, sometimes creating an entirely different picture.

Hobby artists are not exempt from feeling the pressures of hustle culture. Clark says many artists feel like each piece of work they make should do something to push themselves further in terms of recognition and acclaim, which can take away some of the enjoyment.

“When you’re making stuff, you’re hoping you’re (going to) make the next big thing or what you’re making is gonna help you get your next job,” he said. “There’s always this thought in the back of your head, even if you’re trying not to think that.”

Vicky Wang, who goes by Earlybird professionally, is a Ryerson creative industries alumna who has a passion for making music.

“It’s only when it’s forced that it becomes a chore,” she said. “It definitely drains the life and love out of it.”

Wang aims to build a career making music full time, but is careful to only create the music she’s passionate about and not set counterproductive goals, like writing a song every day.

“I always come back to the why of what I’m doing,” she said.

Despite dialogue about the harmful nature of hustle culture, artists still buy into the idea because of how it works on an individualistic level, said Florence. Because the idea is perpetuated by people comparing themselves to others, the pressure to constantly work comes from the individual, he explained.

“The individualistic culture has the idea that we need to strive for personal achievement and to stand out from the crowd,” Florence said. “Whatever we do, we want to be the best of the best.”