Student gets 20k from Ryerson for film project

Where is Kyle Walker, and how far are you willing to go to find him?

That is the central question in a feature film project that is being developed by students and alumni from Ryerson’s Faculty of Communication and Design (FCAD). The creative mind behind the project is Luke Villemaire, a 20-year-old film student who has partnered up with Ryerson alumnus Neil Hansen to produce the film.

The project has already secured $20,000 from the Ryerson Communication & Design Society (RCDS), and $50,000 worth of equipment and post-production services from Hansen’s local production company, Crimson Fish.

Villemaire, who is the vice-president of finance at RCDS, said he’s not stopping until he raises at least another $30,000.

“We’re looking at getting support from other schools around Ryerson,” he said.

“Because a lot of the film takes place in a [television] studio, I’ve met with the dean of FCAD to see the possibility of using some of the studio space in Ryerson because that would save us thousands of dollars.”

The film, which Villemaire describes as a “mix between Gone Girl and Nightcrawler,” follows a group of journalists who want to uncover the mysterious disappearance of Kyle Walker, a boy from a nearby town. “The film explores themes that we often face in the industry [and] how much you’re willing to sacrifice to get ahead.”

Casey Yuen, president of the RCDS, said collaborative film projects among FCAD students are rare. “Not all of our programs are in one building,” she said. “We don’t have an opportunity to meet each other on a social level or even an educational level.”

Yuen says collaborations between students and alumni provide opportunities to connect and learn industry ropes beyond the classroom. “We really want to mimic what is out there in real life situations.”

But the aspiring filmmaker said he’s seen a lot of strong films at this year’s Toronto International Film Festival, including Sleeping Giant and The Rainbow Kid — both are films made by Ryerson alumni.

“I’m really proud to say I’m a Ryerson student and look at a film up there and say, that could be me in a few years screening my film at TIFF.” 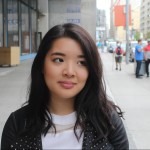 What the Basin Media Hub Means for the...

Deaf Stories on Screen: How Mainstream Media Can...