HIGHLIGHTS
“I feel like I’d lose my identity”: Kids of immigrants on struggling to learn their parents’ native languages
Community profile: St. Lawrence Sunday Antique Market
Meaningful consultation missing from Eglinton Crosstown LRT project, says city councillor
NFTS: Are they worth it for artists and investors in Toronto?
What does going fine-free mean for our city’s most vulnerable Toronto Public Library patrons?
Home Tags Posts tagged with "Ukraine Crisis"
Tag: 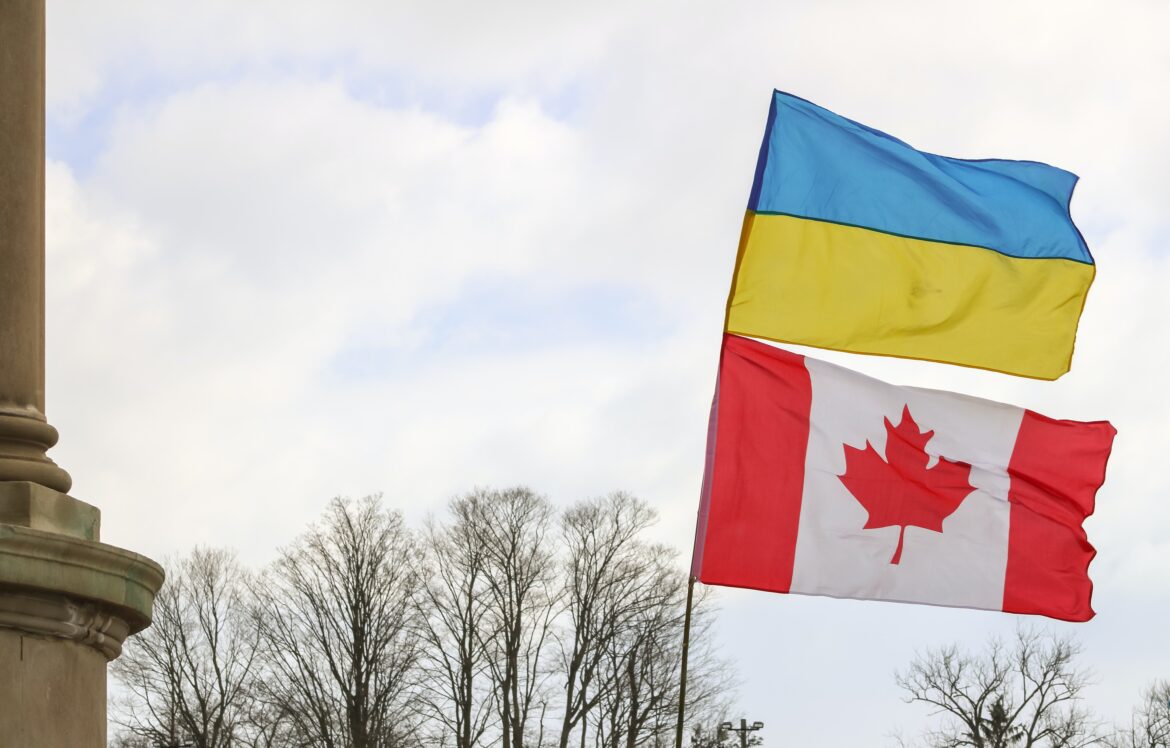 Alexandra Holyk was supposed to be enjoying her reading week in New York City when she heard the news that Russia was invading Ukraine.

“I just kind of stopped in my tracks and the conversation stopped,” said Holyk.

As president of Ryerson’s Ukrainian Students’ Club and an immersed member of the Ukrainian community in Toronto, Holyk feels a sombre atmosphere in her circle.

There are currently 27 students from Ukraine attending Ryerson, according to Ryerson University president Mohamed Lachemi.

Lachemi says the crisis is a priority for Ryerson and that they are “closely monitoring the situation and actively working to ensure the safety and security and well being of our students, faculty and staff who may be affected by the events unfolding in Eastern Europe.”

Ryerson isn’t the only campus in the GTA with a Ukrainian community affected by the crisis.

Third-year University of Toronto student Nadiya Kovalenko grew up in Ukraine and has family and friends still in the country. When her family member was trapped in Kyiv for a few days, she became increasingly worried and anxious.

“That was probably the most stressful time in my whole life,” she said.

She has childhood friends who have taken up arms. Some have volunteered to join the territorial defence and one of them was badly injured in combat.

Kovalenko said the Ukrainian community has long been worried about hostility between Russia and Ukraine, but that they couldn’t possibly have predicted the current situation.

“Crimea has been occupied since 2014. Eastern provinces have been seeing conflict for the same amount of time but none of us thought that things were going to escalate to this extent,” she said.

As one of the co-presidents of the Ukrainian Students’ Club at the University of Toronto, she hopes to support other Ukrainian students who may need it.

This Saturday, Ukrainian students from across the GTA will be gathering outside the Russian consulate for what they are calling ‘The Next Generation Rally.’

“We are looking to highlight the next generation of Ukrainians in Canada who continue to stand up for our language, culture and heritage whether we have recently immigrated here or are fifth-generation Ukrainian in Canada,” said Holyk.

In addition to clubs at Ryerson and U of T, it’s also a collaboration with Ukrainian clubs and associations from Humber College, University of Guelph, McMaster University and York University.

Organized by the Ukrainian Canadian Students’ Union, the rally will begin at 11 a.m. and is open to non-Ukranians who want to support the cause.

“A lot of Ukrainian students in Canada right now are either international students, and they plan to go back to Ukraine, or they’re Ukrainian-Canadians and they had dreams to go to visit Ukraine to see the country of their ancestors and now this has been taken away from them,” said Kovalenko.

Holyk says that the rally is a way to raise awareness on the issue and inspire non-Ukrainians to take action.

“We are proud of our Ukrainian culture, and we will not shy away from the hands of tyranny attacking our friends and family in Ukraine,” she said.

Kovalenko says that one of the few positive outcomes of the crisis has been a reunification of the Ukrainian community.

“We’ve become way more consolidated and more united over what’s happening right now,” she said. “A lot of people before this didn’t publicly identify as having Ukrainian heritage, and now they’re opening up about it and they’re coming together.” 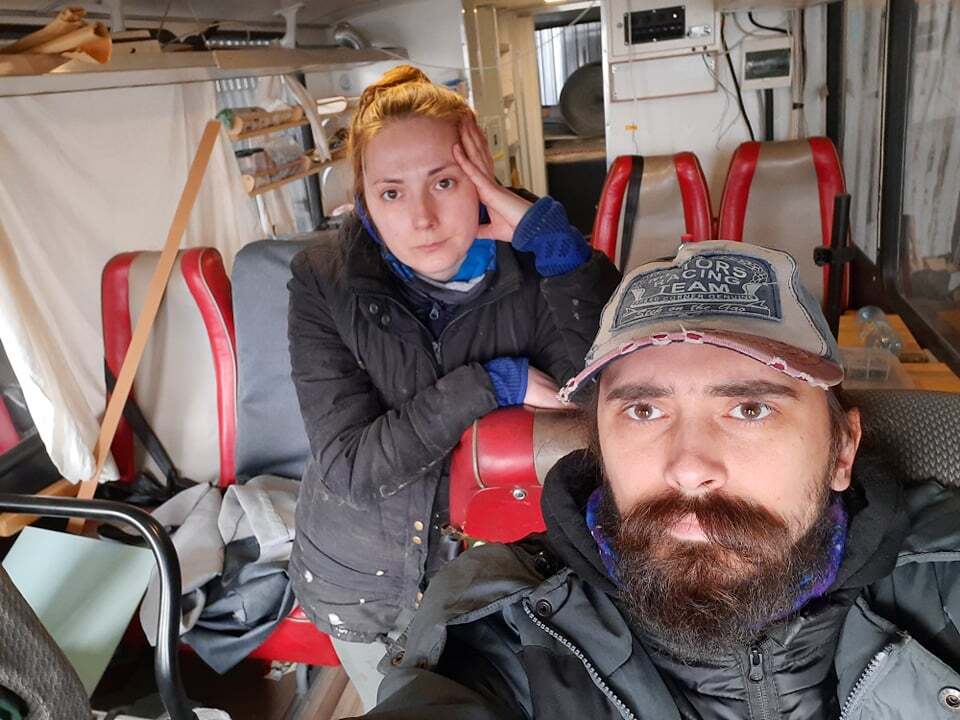 Oleksandr Dzyuba would have never thought that he would be spending his days making Molotov cocktails to use against an invading Russian army.

But that is now his reality, volunteering with others and creating defensive weaponry in a small town 100 km from the Ukraine capital, Kyiv, fearful of when the war engulfing his nation will appear at his doorstep.

We all here are warriors and we’re protecting our lands…preparing the Molotov cocktails and welding the anti-tank barriers…we (are) ready to stop Russians here,” Dzyuba says.

“We want back our daily routine.”

It’s a long cry from just a few years ago, when he was working on his tech company, Adtena, in the Digital Media Zone at Ryerson as a part of a program that welcomed international entrepreneurs and exposed them to Toronto’s startup scene.

Dzyuba, 34, and his wife, Olesia Yatsenko, 33, have been living out of a home on wheels they rebuilt in the town of Kaniv for the last three months and which they originally planned to use for a trip celebrating their five-year anniversary.

But the Kyiv-born couple’s plan to be on the road pivoted when Russia launched a full-scale attack on Ukraine on Feb. 24 and began its path towards the country, triggering a panic and fear amongst the civilians of Ukraine.

“I have no places to stay here, so we spend nights in the closest village,” he says.

Unsure of what is happening outside of their location, Dzyuba and others are constantly trying to stay updated. “You try to check the news all the time, when you can reach your telephone or something, and looking at foreign news,” he says.

Over the past nine days, Dzyuba has stayed in contact with the On The Record team, providing insights on how things in his part of Ukraine are unfolding.

In Kaniv, everything has continued to stay calm, but it has become increasingly difficult to get gasoline and other supplies. “All the most necessary goods are available, albeit in small quantities, and this is more than enough for a healthy diet,” Dzyuba says.

Here we have nothing to complain about — there is a war going on.

Military planes and anti-air systems can be heard throughout the region, signalling warnings of incoming threats several times a day, according to Dzyuba. “My mother and sister in Kyiv (are) hearing it like 10 times per day or 20 times per day, (warning that) some rockets (or) something (is) incoming,” he said in one of his first reports to OTR on March 2.

He has also been able to pick up some information about the progress of the war in other parts of the country. He says he’s received information from friends that their relatives in Mariupol, in the southeast of the country, have been in a bomb shelter for many days, with nothing to drink but collected rainwater.

Ukraine’s president,Volodymyr Zelenskyy, has declared martial law, called on citizens to come forward to defend the country and prohibited all Ukrainian men between 18 and 60 from leaving.

Dzyuba says he wouldn’t have left anyway because it would feel wrong to run to neighbouring countries while his friends and family stayed behind. “What (would) I feel if I just (ran) away from here while a lot of my family members (are) all around Ukraine? Some of my friends are in the military defending us so it’s not a choice (for me) to leave,” he says.

Volunteers in the city are also doing what they can by organizing the local food and water supplies. Preparing themselves for a sudden isolation, they have built up supplies of food that they can use and that they could give to the military.

Dzyuba has also been able to gain a little insight into the propaganda war being waged in Russia. He has a YouTube channel dedicated to the building of his motorhome, with about 5,000 followers.

“We were surprised that hundreds of our longtime subscribers from Russia, with whom we have been communicating for years, believe and are trying to prove to us that ‘there is a neo-Nazi state power in Ukraine,’ that ‘Russia does not attack civilians’ and ‘does not shoot at cities.’” He says he also hears his followers adopt the language of Russian president Vladimir Putin in saying that what is happening is “not a war, but a special peace operation” and that Ukraine is developing nuclear weapons and oppressing the Russian-speaking population in the country.

“And it’s extremely hard to convince them of the opposite even with all the facts, and crime evidence,” he says.

Despite that propaganda and despite the ongoing war, Dzyuba say: “Ukrainians right now (are) really united.”

Nevertheless, he still worries about the future. “When the war ends it will not be easy to recover our economy, to rebuild our cities.