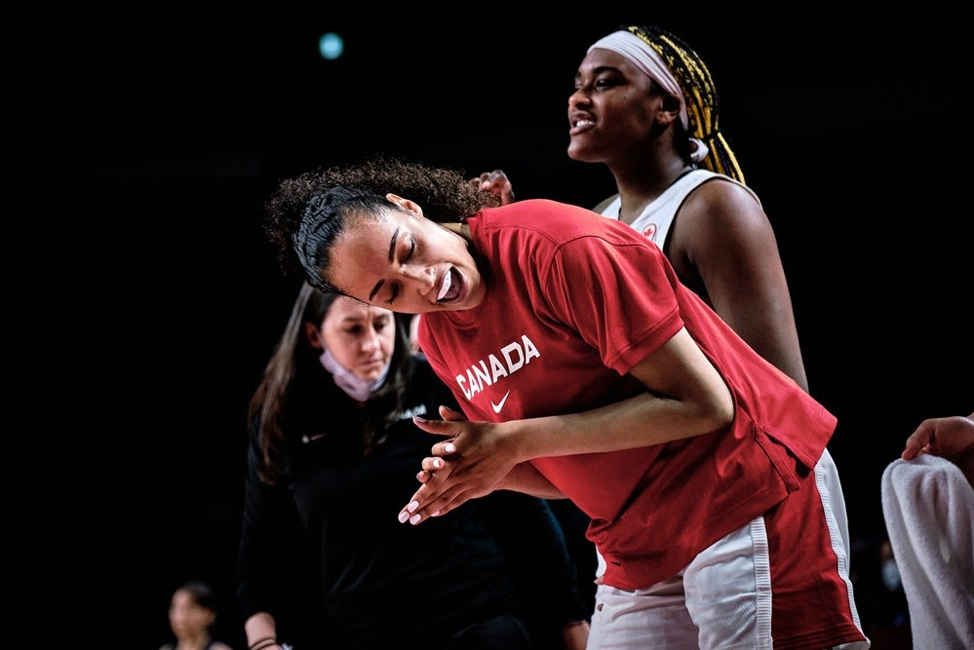 Competing in the Olympics is an accomplishment regardless of the outcome, but for the Canadian women’s national basketball team, the goal of an Olympic medal remained just out of reach.

Despite being ranked fourth globally by FIBA, the governing body for international basketball, the Canadian women’s team did not qualify for the knockout round at this summer’s Tokyo Games. It won only one out of three games in group play and placed ninth overall.

“Any time you set your sights on a high goal and you don’t achieve it, there’s some rough feelings that come with that,” said Clarke. “That’s high performance sport and that’s what happens when you put yourself out there to try and accomplish something big.”

The Canadian women’s team made the quarterfinals of the knockout round in the past two Olympics, losing to the United States in the 2012 London Olympics and again to France at the 2016 Rio de Janeiro Olympics.

The team had high hopes for more success as it prepared for Tokyo.

They met in Tampa, Fla., in mid May at the Raptors’ practice and training facility to prepare for the FIBA Women’s AmeriCup, held in June in Puerto Rico. They placed fourth in the tournament, losing a close semifinal game to the host country, and then coming up short in the bronze medal game to Brazil.

“Anytime you get competition [like the AmeriCup] leading up to major competition like the Olympics and get a chance to play some games with part or most of your roster, that’s important,” said Clarke. “It was a big part of our preparation for the summer.”

The team was initially missing three WNBA players: Kia Nurse of the Phoenix Mercury, as well as Bridget Carleton and Natalie Achonwa of the Minnesota Lynx. They joined the Olympic team for the first time in Japan in the middle of July.

Around the same time, CEO of the Tokyo 2020 organizing committee, Toshiro Muto said in a press conference that last minute cancellations of the games was not out of the question, citing athletes testing positive for COVID-19 and sponsors not planning on showing up to the opening ceremonies.

Clarke said she did not have any doubt that the Games would continue because of the protocols that were put in place. The team only had access to their hotel, the training facility and the arena where they were playing.

According to an article by Sports Illustrated, everyone at the Olympics was required to socially distance and wear a mask at all times to limit the spread of COVID-19. The vaccine was not mandatory for athletes and most of the protocols were the same no matter what an athlete’s vaccination status was.

Team Canada lost its first to Serbia, 72-68. Canada wasn’t efficient from three, shooting 21 per cent from beyond the arc compared to 47 per cent from Serbia. Canada also missed eight free throws, compared to Serbia’s three misses from the stripe.

The team remained hopeful despite the loss.

“There’s lots of [teams] whose journeys to the podium include a loss along the way. We were prepared and knew that we could have still possibly accomplished our goals with a loss in pool play,” said Clarke.

The team’s second game was a 19-point victory against Korea. Canada dominated the board, pulling down 22 offensive rebounds compared to Korea’s nine. They also outscored the Korean team by 11 points in the fourth quarter. The team took time to enjoy their victory before preparing for their last group game against Spain, the team ranked third in the world.

Coming into the game, the Spanish women’s team had defeated both Serbia and Korea handily. Unfortunately it was much the same story for Canada, with the team losing 76-66. Canada never led once during the game, with Spain leading by as many as 20 points in the third quarter. Canada shot 38 per cent from the floor, the same percentage they shot during their game with Serbia.

Despite the loss, Canada had a chance to qualify based on plus/minus, a statistic that measures the difference between a team’s total scoring versus their opponents. France and Australia ended up taking the last two spots in the knockout round, leaving Canada on the outside looking in.

Clarke didn’t mince words. She said she felt heartbreak and disappointment that the team wouldn’t move on to the next round.

Since their loss to Spain in July, she’s had time to reflect. Instead of one big overarching lesson, she said she’s learned many little lessons, like how challenging it is to win on the world’s stage and how the margins for error and success are small.

Players from Ryerson’s women’s basketball team watched the Olympic team play from here in Canada and say they were inspired by Clarke’s performance on the sidelines, despite the outcome.

“Seeing her work with the best athletes in our country and being on the highest stage is inspiring,” said Mikaela Dodig, a guard on the Ryerson women’s basketball team. “The experience she had and all that she learned will be brought back to our team, which is going to make us better this year.”

Tiya Misir, another guard on the Rams team, said Clarke has all the attributes of an Olympic level coach.

“I felt extremely proud and excited for her, as being invited to the Olympics is something that only a special group can be a part of,” she said. “She has such a strong passion and IQ for the game.”

With the Olympics in the past, Clarke is now focused on this upcoming women’s basketball season for Ryerson, as the team looks to compete for a Critelli Cup (awarded to the OUA champions) and — they hope — a national championship.

“Despite the disappointment, it’s a great experience that I hope to be able to build on,” she said. “I look forward to bringing some of the things I learned from that environment back to our Ryerson team and our department, so just excited to keep getting better.”