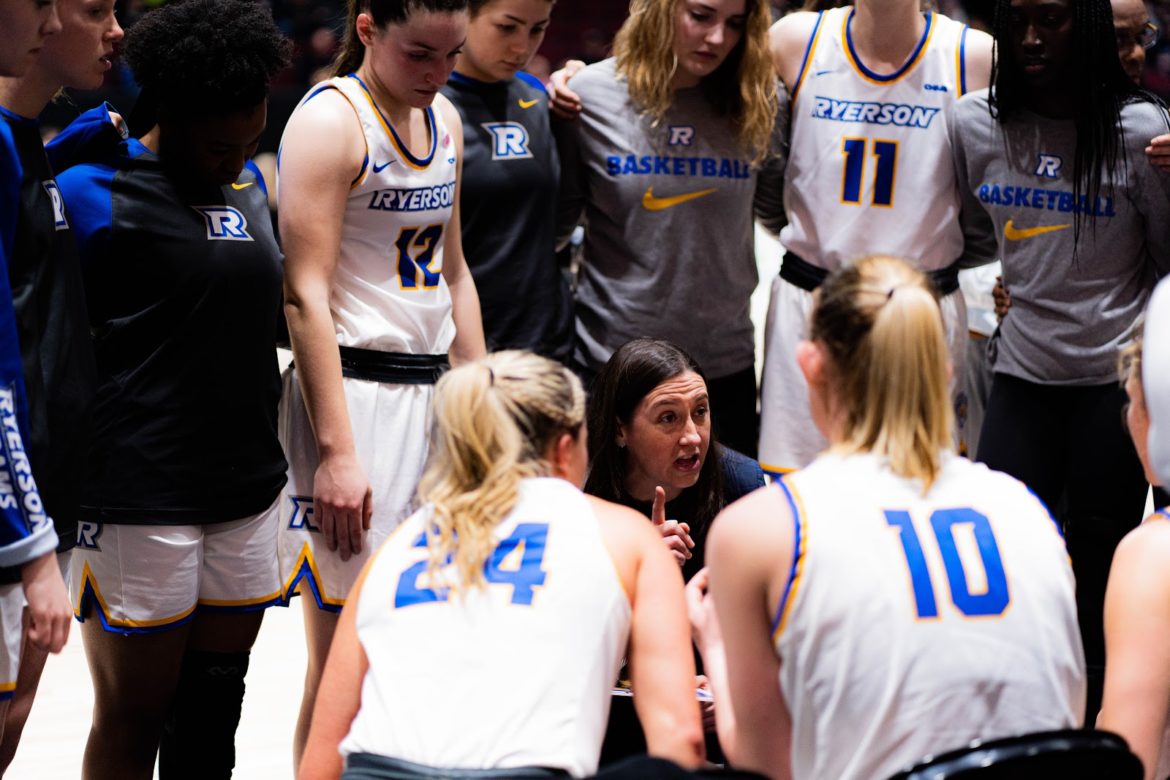 Ryerson women’s basketball head coach Carly Clarke is keeping hope alive that she will fulfil her Olympic dreams this summer, despite cancellation rumours due to the COVID-19 pandemic.

Clarke, an assistant coach with Canada’s senior women’s basketball team, said she’s heard rumours swirling about the potential cancellation of the Olympics again, but Team Canada is still planning for the summer in hopes that it isn’t.

“If it doesn’t, it’ll be a great deal of disappointment but we’re certainly not waiting to hear a yes or no before we get ready,” said Clarke. “We’re getting ready like it’s happening.”

Clarke and the team have been trying to meet virtually at least once a month, with staff meetings weekly. They are also checking in on players once a week, with many currently outside of Canada playing in Europe or in the NCAA.

In February 2020, Clarke was in Belgium with the Canadian women’s basketball team as it qualified for the Olympics. Team Canada punched its ticket after defeating Sweden in the FIBA women’s Olympic qualifiers. The team finished the tournament with a record of 3-0.

“For me it was exciting, but I think I got the most joy just watching the players enjoy the moment,” said Clarke. “We had a few people on the team that qualified for their third Olympics, some that were doing it for the first time.”

The win sent the women’s basketball team to the Olympics for the third consecutive time — and for Clarke, her first.

“It was a great deal of pride (and) accomplishment with being part one of the best teams in the world in women’s basketball. That part was not lost on me.”

After the win, Clarke was expected to travel to Tokyo in the summer of 2020 with Team Canada to compete in the Olympics. However, due to the coronavirus pandemic, the event was postponed to July 2021.

As Clarke waits for her moment on the world stage, recent reports have jeopardized her hopes once again.

The Times reported this past week that the Japanese government will likely have to cancel  the Olympics due to COVID-19. According to an unidentified government source, their focus is on securing a hosting bid in 2032 instead.

“No one wants to be the first to say so but the consensus is that it’s too difficult,” the source told The Times. “Personally, I don’t think it’s going to happen.”

Shortly after the report, a statement from the International Olympic Committee (IOC) on Twitter called the rumours of the event’s cancellation “categorically untrue.”

“All parties involved are working together to prepare for a successful Games this summer,” the statement said.

“We will be implementing all possible countermeasures against COVID-19 and will continue to work closely with the IOC, the Tokyo 2020 Organizing Committee and the Tokyo Metropolitan Government in our preparations for holding a safe and secure Games this summer.”

Clarke has been an assistant with the senior team for over three years now, rising up the ranks after coaching many of Canada’s younger aged teams. In 2017, she led the U-19 junior women’s national team to its first-ever medal at the world cup, a bronze medal.

The pandemic left Clarke and the Rams sidelined for the season after Ontario University Athletics (OUA) cancelled the 2020-21 winter sports in October.

To make up for that, Clarke has invested her time away from the court to recharge, connecting with people from across the world while finding ways to make Ryerson better for when the team makes a return to the Mattamy Athletic Centre (MAC).

The last time the team hit the floor was in the fall, when COVID-19 cases were down and the MAC reopened for students to work out and varsity teams to practise.

“The excitement and energy I had just to be back there was so amazing,” said Clarke. “For the whole season to be cancelled and (having) to continue to wait to get back at it is challenging.

“I’m just trying to take one day at a time and get better and be ready for whenever we can get back out there.”