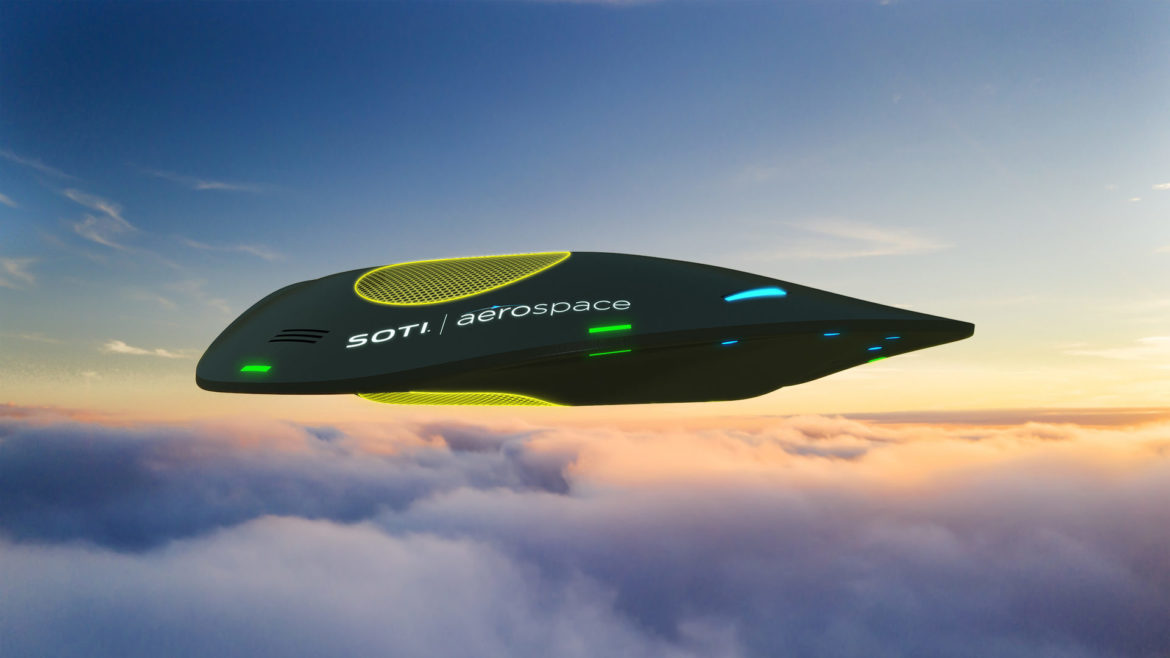 Agreement involves $US2.5 million towards the creation of a new Ryerson research chair and ‘hands-on’ co-op and training opportunities for the university’s computer science and aerospace engineering students

SOTI has enlisted Ryerson University to help design autonomous aerial drones for use in health care and search-and-rescue operations. This research will support the Mississauga, Ont.-based tech firm’s new aerospace division, which was publicly announced last week and first reported by The Logic.

The privately held company plans to invest $US20 million to launch the venture, and will allocate $2.5 million to Ryerson to lead its research. It will also include the option for more funding for future research projects. The school will use this money to fund the creation of a new research chair and support on and off-campus research, training and co-op opportunities for students.

“This collaboration unites leading aerospace researchers and industry experts to accelerate the development of aerial drone research,” said Mohamed Lachemi, Ryerson’s president and vice-chancellor, in a statement announcing the move. “The agreement will also create new opportunities for our students to work on cutting-edge projects through enriched learning experiences, internships and scholarships.”

Founded in 1995, SOTI is a software firm that focuses on managing mobility and internet of things (IoT) technology for large enterprises. The company, which the BBC reports is valued at more than $US1 billion, employs approximately 1,200 people in 28 different places around the world, and derives the vast majority of its revenue from outside Canada.

SOTI views the new partnership as a long-term commitment, and hopes the new division will “amplify Ryerson’s reputation as an international destination for aerospace learning.”

With Ryerson’s help, SOTI aims to design and bring to market a small autonomous aerial drone, while also building out the company’s talent pipeline by targeting the school’s aerospace engineering and computer science students.

“Our goal is to really establish a partnership with Ryerson and perform advanced aerospace research with some leading-edge folks,” Shash Anand, SOTI’s vice-president of product strategy, told the Ryersonian.

Anand said the company chose to partner with Ryerson given its reputation for aerial drone tech research. SOTI views the new partnership as a long-term commitment, and hopes the new division will “amplify Ryerson’s reputation as an international destination for aerospace learning.”

Ryerson’s relationship with the company began several years ago, when SOTI’s founder, president and CEO, Carl Rodrigues, advised the university regarding the creation of the Rogers Cybersecurity Catalyst —a Brampton, Ont.-based not-for-profit training and innovation centre owned and operated by the school.

“We first engaged with Ryerson in the cyber area, and through our discussions, broadened our horizons to include aerospace research,” Rodrigues told the Ryersonian. “Security continues to be a focus and will certainly extend into our ongoing work.”

Rodrigues approached Ryerson this summer to gauge the school’s interest in autonomous drone research, and expressed a particular interest in engaging with undergraduate students.

Steven Liss, Ryerson’s vice-president of research and innovation, told the Ryersonian that partnerships like this are important to Ryerson’s trajectory, particularly in scholarly, research and creative (SRC) activity.

“(Rodrigues) has a strong interest not only in SRC and research, but also in… access to outstanding talent,” said Liss, adding that these partnerships are mutually beneficial as the private sector stands to benefit from student development.

He said that 60 per cent of Ryerson’s research funding comes from partnership funding from not-for-profits and private sector companies. “That’s probably an increase in 20 to 30 per cent over the last four to five years.”

Liss said that Ryerson also plans to leverage this partnership to obtain access to other research funding from government sources and organizations like Mitacs, a not-for-profit that supports industrial and social innovation in Canada.

Anand said SOTI plans to create an “interactive educational experience that leads directly into career paths in the tech industry.” He added that Ryerson students will get “hands-on” opportunities to work with company experts on research, as well as the chance to network with them, discuss the industry, and pose questions about potential career options.

“I think these specific co-op opportunities are important because they provide the students with an insight into how aerospace is changing,” said Desai.

The state of the airline industry and Ryerson’s aerospace research

The Ryerson Aerospace Engineering Centre, a 7,000-square-foot facility located at Downsview Park, houses a number of research projects related to airline technologies, including many in partnership with Bombardier. The airline industry has been hit particularly hard by the virus and the international travel restrictions implemented to curb its spread.

“Aerospace and airlines are major features of our ability to move goods and services, let alone people, around the world,” said Liss, highlighting the continual importance of air travel in global supply chain management.

Liss also sensed a research opportunity in figuring out how to ensure the health of air travellers. Desai confirmed to the Ryersonian that some work at Ryerson is already being conducted “to act against the virus,” but declined to go into specific detail.

“It has taken projects that were theoretical and boosted them to become important (and) more significant than some running projects,” said Desai.

What SOTI and Ryerson are trying to build

Anand told the Ryersonian the physical location of the SOTI-Ryerson venture is yet to be determined due to COVID-19 and, for now, its research will take place remotely. However, he confirmed that SOTI plans to divide its operations between Ryerson and Mississauga.

SOTI hopes to design and bring to market a small autonomous aerial drone that can lift lightweight objects in small spaces. For now, SOTI is working with a bigger model because it’s focused on the underlying tech.

Anand said the company’s present research is focused primarily on sensor and “PID tuning” tech. Sensors can be understood as the drone’s eyes and ears, while PID tuning — or proportional-integral-derivative tuning — can be thought of as work on the drone’s brain, which processes and acts upon the info collected by its sensors.

Desai said there is still a long way to go before drones can be made completely autonomous.

Today’s drones can be flown remotely, but if the connection is lost, the vehicle needs to be able to get where it is supposed to go without any commands from the pilot. It should be able to avoid any obstacles, land in the right spaces, and slow down or speed up according to its environment.

“When it comes to unmanned vehicles, autonomy is, from software and electronics, the most important thing. And no one in the world has really completely cracked it yet,” said Dhvanit Desai, a Ryerson graduate student studying aerospace engineering.

This is a particular problem in cities, where signal interference due to frequencies such as Wi-Fi and cellular are more common and thus, disruptive.

“When it comes to unmanned vehicles, autonomy is, from software and electronics, the most important thing. And no one in the world has really completely cracked it yet,” said Desai.

According to Desai, the other main problem that needs to be overcome to make autonomous drones market-viable is power: how much a drone can carry and how long it can carry it for.

He said that current electric drones are “basically at a wall in terms of their capability to carry cargo.”

“Once that issue of power — longer endurance, more payload, and the issue of autonomy, which we’re tackling here at Ryerson — are addressed, that will kind of break a barrier, and then you can see a faster and faster rate of adoption.”

He anticipates that the use of autonomous drones will become a lot more commonplace in the future, and views the growing popularity of wearable tech — electronic devices that are typically worn as accessories and employ the use of sensors — as a stepping stone towards autonomous drones.

How SOTI aims to apply this tech

Anand said that although this move was long-planned and not driven specifically by COVID-19, the pandemic has accelerated the need for the health-care industry to push toward adopting and leveraging tech to save time.

A recent report the company released on the state of mobility in health care found that nurses and other health-care workers surveyed spend an average of over half of their time on administrative tasks, which includes inputting data to various systems using paper-and-pen processes.

Moreover, 73 per cent indicated that their existing tech and systems were not equipped to handle the global pandemic.

“There’s so much that’s being done that could be automated,” said Anand.

Desai believes drone tech could be used extensively in the health-care industry, particularly as COVID-19 has made treating patients in person more dangerous.

He said it could be as simple as a patient indicating they need medicine and, with the push of a button, having an autonomous drone fly over to provide it.

“That can make a huge difference in saving somebody’s life. We can’t even start to count how many lives are going to be affected by that.”

The company also sees potential applications in the search-and-rescue space. “You could send a drone to inspect a mineshaft collapse,” Rodrigues told The Logic. “It would create a 3D map that would show if there are humans inside and how to navigate to them.”

The future of autonomous aerial drones

Desai expects the next two to three years in the autonomous aerial drone space to be slow, but predicts that once the technological barriers he outlined are crossed, the use of drones will become safer and even more economically viable.

“That would be seen four or five years from now — at that point or onwards, you would see a lot of the stuff that’s being promised today, like drones delivering your parcels or packages and whatnot,” said Desai.

What excites him about the SOTI-Ryerson venture is that there aren’t many programs in Canada that are independent, as most support the United States.

“If this goes well, I would be really happy because we can create a real breakthrough in aerospace here at Ryerson. It will be independent, and something others can look up to us for.”