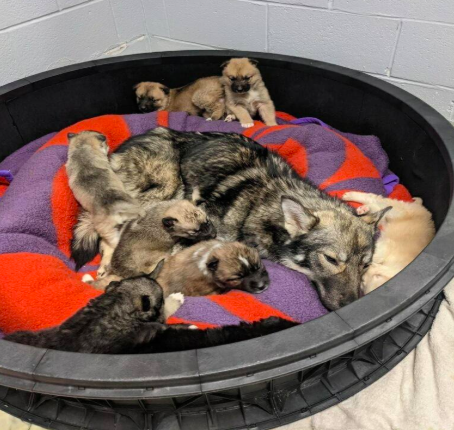 The rescued dogs include two female dogs and their puppies

The Toronto Humane Society (THS) located in Toronto Centre will soon have 27 dogs from northern Ontario put up for adoption, according to a Facebook post made on Monday.

The THS said in the post it received these dogs through Northern Reach Rescue Network, a non-profit organization that sends dogs from northern Ontario communities to the south for assistance.

“The transport itself was quite a harrowing journey, which included whiteout conditions, road closures and all the challenges that come with a northern winter,” said THS. “After an exceptionally long drive by our dedicated driver, our adorable and fluffy guests arrived yesterday morning at 6 a.m.”

Among the dogs rescued are two female dogs and their puppies. One of these female dogs is named Dagmar, and she has one-month-old puppies.

The THS said some of the dogs will be returning to their communities once they receive the veterinary attention they need. Other dogs will be provided with new homes in Toronto.

“This transfer truly represents the meaning of partnership and required all hands on deck,” said the organization.

There have been 11,000 adoption applications from people at the THS in the last two months. It processes around 3,000 adoptions in an average year. While the agency says it’s thrilled with the community support, it has created a backlog of applications.

The adoption process consists of four steps. These steps are setting up an appointment through the adoption meeting booking system, virtual counselling, a virtual meet and greet and finalizing the adoption.

Transfer adult dogs cost $400 to adopt and puppies can be purchased for $500.