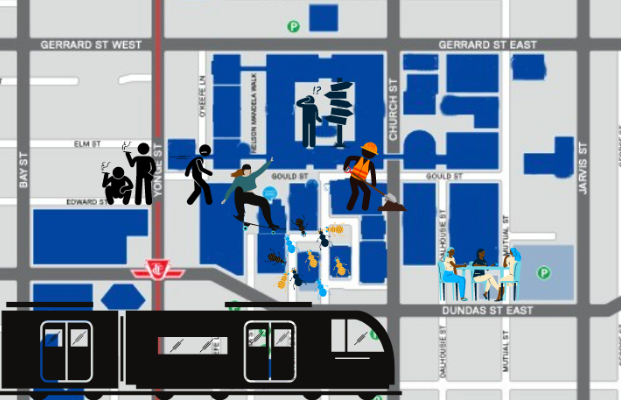 Our mutual complaints about campus might become our favourite memories

Last March, nobody knew that they were spending their last days on campus for what would feel like an eternity. If you’re like me, you skipped that last day of class hoping to get a head start on your “two week March break,” as we said back then. Maybe it’s because getting out of the house seems so desirable, but a morning greeting from the ominous gas coming from the hole in Gould Street doesn’t sound that bad. In fact, it’s starting to look like some of us sort of miss it.

The Ryersonian asked students and faculty what they took for granted on campus. We discovered that what used to be the most annoying aspects of campus life have become what people miss the most. In times like these, who can blame those chasing the thrill of being late “because of the Line 1 subway” even though they’re holding an iced coffee?

Getting lost in Kerr Hall

It doesn’t matter what year you’re in; everyone gets lost in Kerr Hall at least once each semester. Oh to return to the times when you swear you were walking northbound but end up in the Kerr Hall East basement. At least when the Tim Hortons near the RCC bridge was open, people could be guided to their destination by the smell of stale coffee. What do we have now?

Bumping into people you don’t want to see

Sometimes it feels like there’s only two degrees of separation between everyone in Toronto. This becomes increasingly obvious when you lock eyes with that person you “used to” be in love with, or the ex-best friend who’s dead to you in line at Banh Mi Boys. With your appetite now gone, you wonder why you chose to go to a school crammed into a high-density downtown core.

Remember when you could walk to class without getting halfway down Gould Street and realizing you’ve hit a dead end and have to turn around? Neither do we.

The SLC to RCC pipeline

Of course, this is Rye’s version of the PATH that helps students avoid the Gould street construction and cold weather. One thing we must normalize when coming back to campus is just getting off the streetcar at Church instead of walking through a maze that looks like a glorified middle school hallway.

Smoking in the quad before it was banned

What has banning quad smoking done besides make the stench outside the SLC even more potent? I guess we’re called Rye High for a reason!

It almost reads like fan fiction when you knock on the study room door and get scowled at from someone who doesn’t care that it’s exam season and only one-hour blocks are available. That five to seven-minute period it takes them to pack up is the most ready you’ve ever been to fight. Even if this group had to do the same to the group before them, you don’t care, as you now only have fifty-four minutes to regurgitate twelve weeks of class (only seven of which you attended).

Mad dashing across campus in the ten minutes between classes

It’s all fun and games when you book your classes around to have a day off, until you realize you need to bolt from the Sally Horsfall Eaton Centre to Ted Rogers School of Management between 9am and 9:10am every Tuesday.

Page One having no available tables

When you make the switch from getting overpriced oat milk matcha lattes from Balzac’s, you think that there’s no way a cafe all the way on Mutual Street will have no available seating. You were wrong then, and you are wrong now.

Almost getting run over by the Lake Devo skaters

Picture this: you need to get to Dundas Street from the middle of Gould Street. You look out at Lake Devo and there’s not a skater boy in sight. You decide to cut through to quickly get to the other side of Victoria Street. All of a sudden some dude who’s wearing a beanie that’s way too small for his head has lost control of his board and is charging right at you. You run faster than you do between classes, avoiding both getting crashed into and being gaslit by a boy who uses empty Pabst Blue Ribbon cans as decor.

The best study buddies are the ones that make you have to throw out all of your furniture when you get home. Does anyone else feel itchy?