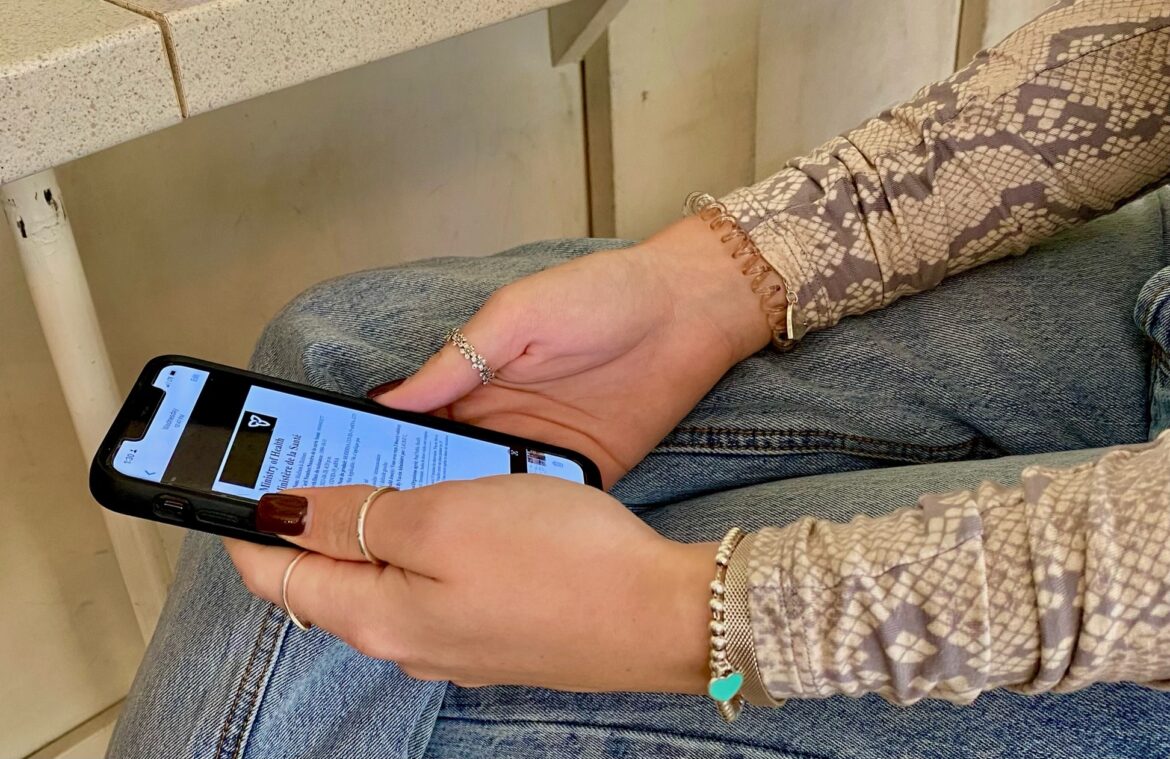 How confident are you in the vaccine passport system?

Vaccine mandates have been implemented and, despite being warned of the consequences, some individuals are finding loopholes around getting the COVID-19 vaccine by creating forged documents that state their proof of vaccination.

Over the summer, the vaccine passport loomed but most people were able to travel — even internationally — without care for their vaccination status. However, that is subject to change in the coming week.

As of Oct. 30, proof of vaccination will be required for those travelling from Canada, regardless of citizenship. In the U.S., restrictions seem to be looser, giving citizens an additional month to get vaccinated.

On Oct. 18, the Ontario government began pushing out enhanced vaccine certifications — more commonly known as vaccine passports — complete with a QR code. Businesses will be able to use the Verify Ontario app to scan QR codes, which will only appear with a green checkmark if the individual is fully vaccinated.

Constantine Karbaliotis, a lawyer at Nnovation LLP and an expert in privacy management, said the use of QR codes offers maximum privacy and protection. While it is a step in the right direction, he said that it could have been implemented much sooner, to deter those who were not yet fully vaccinated from obtaining fake vaccine passports.

“The flaw is that we didn’t have the apps for this from the beginning and we created the window of opportunity for [fake vaccine passports] to happen — it should have been released sooner,” said Karbaliotis about Verify Ontario. “Now that [Verify Ontario] is out, we have a reliable system for businesses, and I bet we’ll see a spike in vaccinations as the government closes the door on the use of the old vaccine documents.”

Vaccine passports remain essential to the government’s protection plan in avoiding future lockdowns. Ontario Premier Doug Ford said now that the province has created a discussion around their post-pandemic plan, there are hopes of exiting Stage 3 in the coming weeks. However, the original PDFs and papers are still currently being accepted, as well as the new QR codes.

“The enhanced vaccine certificates and Verify Ontario will give our businesses comfort in their ability to operate safely,” said Ford in a statement released online.

But is that the case?

With the various forms of vaccine passports that already exist, as well as Verify Ontario coming into effect, On The Record decided to look at how easy it would be to get and then use a fake vaccine passport.

Karbaliotis said that it’s important to note that individuals are taking on a tremendous risk by forging vaccine passports, and it is happening more often than one might assume.

“Using [a fake vaccine passport] is like demonstrating that humans are terrible at managing risk,” said Karbaliotis. “The risk of getting the vaccine is somehow so much greater to them than the risk of being charged — it’s not a good judgment call.”

Nevertheless, Allison, a fourth-year journalism student whose name has been altered to protect anonymity, spent a week in New York City with a negative COVID-19 test — but no vaccine. Instead, she carried with her a fake vaccine passport, a PDF-copy indicating that she had received both doses of her shot months earlier.

Counterfeit vaccine passports or false submission of vaccination status can result in a fine of up to $750,000 or six months in jail under both the Quarantine Act and Criminal Code for forgery, according to the Canadian Border Services Agency (CBSA).

After careful consideration, Allison decided to risk her health and safety for four days over the fall reading week, knowing the legal consequences she could face upon getting caught with the fake vaccine passport.

With her fake vaccine passport in hand, Allison first visited a Shake Shack in Times Square, easily acquiring a meal hassle-free. Her confidence grew each time she presented the fake document to bartenders, security staff and waiters during her stay in New York City. They all fleetingly glanced at her passport, unable to detect signs of forgery.

“The only place I may have been worried about was the Metropolitan [Museum] just because of their prestige,” Allison said, “I was sure security might look twice but no, inside I went.”

We played this audio for John, a creator of fake vaccine passports who spoke with On The Record on the condition he remain completely anonymous. He said he was shocked to learn how lenient the United States was when it came to checking passports from out-of-country. He had not believed Allison would be so successful.

“I don’t know how that would even work… I wouldn’t make a passport for someone who planned to travel,” he said. “I’ve only ever made passports for close friends who I trust not to get me in trouble.”

After Allison’s successful subterfuge in New York, On The Record decided to test Toronto-based customer service employees and health-care professionals when it came to deciphering the difference between real and fake vaccination passports.

On The Record conducted this experiment with the intent of uncovering the truth behind businesses and their commitment to following government guidelines when it comes to vaccinations.

As the forged PDFs used in New York had an Ontario-based watermark, On The Record was under the impression that Ontarians would be quicker to notice the falsified document, giving a new angle to the investigation. However, that wasn’t the case.

On The Record decided to try the experiment at a Shoppers Drug Mart location because of the fact that they run their own COVID-19 vaccine clinics. We were convinced that a pharmacist or health-care practitioner would be able to identify a certificate that they hand out daily.

Janis, a pharmacist at Shoppers Drug Mart who spoke with On The Record under the condition that her last name wouldn’t be mentioned, was confident she would be able to spot the difference between a real and fake version. As she scrolled through both images presented to her, she hesitantly answered, “I don’t know which one is the right one.”

Once we indicated to her which one was the right one and informed her of its success in New York, Janis was shocked that it worked. She explained that she was going off of familiarity based on past experiences.

“I think customer service [employees] would have a very hard time because they aren’t properly trained.”

At the beginning of September, Billy Lo, among other volunteers, developed a tool by the name of Grassroots. It worked to convert the Ontario vaccine receipt into a pass for the iOS Wallet. However, despite its convenience and user popularity, some locations, such as the Beaches Cinema, are hesitant to accept it as a valid proof of vaccination.

We decided to show Adamson three versions of a vaccine PDF — two of which were fake and one real — and he determined he could not tell the difference.

“I work with digital media, so I know how easy it is to fake these kinds of things,” Adamson said. “It doesn’t surprise me that someone got away with this. I am surprised that there hasn’t been a little more rigour at the ministry level, with regards to using the right technology to identify this kind of stuff.”

Adamson said he believes further steps could have been taken to make the passport system more honest and efficient. “So it’s not just left up to whatever doorman is making the judgment, there’d have to be specific training on what kind of things to look for,” Adamson said.

The problem with Verify Ontario is that an individual’s original physical vaccine certificate is still considered to be an eligible form of proof when entering businesses. According to some establishments, like LoveChild Nightclub and Paradise Theatre, the use of PDFs is ongoing despite the implementation of the QR code system.

Eleanor Zichy, Toronto Centre resident and supervisor of Paradise Theatre, admitted that her employer hasn’t yet begun to use the QR code system. “I wouldn’t consider myself tech-savvy, I’ve still been checking papers.” Asked whether the QR code will be required to enter the theatre, she said it’s unclear if and when it would take effect.

While questions have been raised as to whether there will be stricter guidelines for the proof of vaccination, it appears there are a myriad of ways to construct a fake passport seamlessly.

With simple applications like Microsoft Word and Adobe Photoshop, concerns are being raised in regards to how easy it is to let anti-vaxxers into gyms, restaurants and even sports arenas. With sellers based both in and out of province, files can be quickly edited to change names, birth dates, health card numbers and dosage dates. As of right now, there is no way to know how many fake vaccine passports are in circulation within Canada.

Sam is a fake vaccine passport creator who spoke to On The Record under the condition that her last name would not be revealed. When shown a real and fake vaccine passport (that was created by another individual), Sam was quick to note how the real identification seemed less professional.

“Yours is fake, it has to be,” Sam said, noting that the middle initial on one certificate was printed in lowercase lettering. Vaccine certificates can look different depending on where they’re issued or who they’re issued by. However, they share many commonalities, like a lot number, a date, a dose and a nurse’s signature. “Mine has my full middle name and it’s all in capitals, so I think that’s what threw me off, otherwise they’re pretty similar and would work anywhere.”

For Sam, the reason for not being vaccinated is taken into consideration when deciding to make a fake passport. “I have two friends, one of whom is anti-vax and one of whom just didn’t want to take the vaccine for health reasons, which I totally get,” Sam said. “I probably wouldn’t make a fake passport for an unimmunized friend just because they didn’t want it, or were too lazy to get their shots.”

Toronto Centre resident Jayden, who spoke with On The Record on the condition that his full identity would not be revealed, said that his reasoning for continuing to use a fake vaccine passport is because he got his first dose later than most, but had to suffer the consequences of being barred entry to businesses until 14 days following his second dose.

“I didn’t want to get my shot until enough people had gotten theirs. Then I had to wait five weeks before my second [dose] and two weeks following that to go to dinner or even the movies,” said Jayden. “Of course, if the opportunity presents itself, I’ll use the fake version until I no longer need to.”